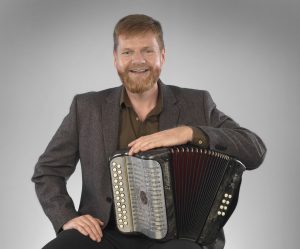 Danny O’Mahony is a traditional musician from Ballyduff in North County Kerry. He grew up playing music with the older generation of musicians in his locality. His late father Mick had a very positive influence on Danny as a young child and nurtured his keen ear and interest in traditional Irish music. Both imaginative and fearless in his interpretation, Danny’s musical style is expressive and deeply personal, and reflects his affinity with the music of past masters.

His performance abilities have been acknowledged through winning Junior & Senior All-Ireland titles and graduating from the University of Limerick with a Masters in Performance. In 2013 Danny was awarded Top Button Accordionist (US, IRE, EU, UK) by the Irish Music Association in America.

He collaborated with concertina maestro Mícheál Ó Raghallaigh in 2012 and released their duet album, aptly titled ‘As it Happened’. This features Danny & Mícheál playing unaccompanied in the comfort of Mícheál’s kitchen. ‘As it Happened’ was awarded Instrumental Album of the year by LiveIreland Music Awards.

The Shannon Vale Céilí Band was revived by Danny in 2009, having been originally formed in Ballyduff by fiddler Dr. Mick Sweeney in 1959. Some of their achievements to date include winning the prestigious All-Ireland Senior Céilí Band title at Fleadh Cheoil na hÉireann (2011), performing at Áras an Uachtaráin for President Michael D. Higgins on St. Patrick’s Day (2014), and releasing their debut album ‘Shannon’s Lovely Vale’. www.shannonvaleceiliband.com

Danny presents and produces a popular weekly radio programme on Radio Kerry, which features Irish Traditional Music and Song. ‘Trip to the Cottage’ began in 2004 and has many followers, not only in Ireland but all over the globe, who tune in live on Monday nights or download the podcasts from http://www.radiokerry.ie/podcast_series/trip-to-the-cottage/

In September 2019 University College Cork supported by the Arts Council of Ireland appointed Danny O’Mahony as their Traditional Artist in Residence. This prestigious position consists of conceiving and delivering a series of Lectures & Concert Performances throughout the year at the School of Film, Music & Theatre at UCC.

O’Mahony has immense experience in Traditional Irish Music tuition over a period of three decades. He is a guest tutor in various University Irish study programmes both nationally and internationally and is a registered tutor with the Kerry Education and Training Board. He frequently attends festivals and summer schools, at home and abroad, as guest tutor, lecturer and performer.

A selection of performances, collaborations and tours to date include:

“In Retrospect is an instrumental fusion of generational tradition where nostalgic tones are enhanced by the innovative instrumentals of a serious talent. A debut delight” – Irish Music Magazine, September 2011.